"Yours, O LORD, is the greatness and the power and the glory and the victory and the majesty, indeed everything that is in the heavens and the earth; Yours is the dominion, O LORD, and You exalt Yourself as head over all. 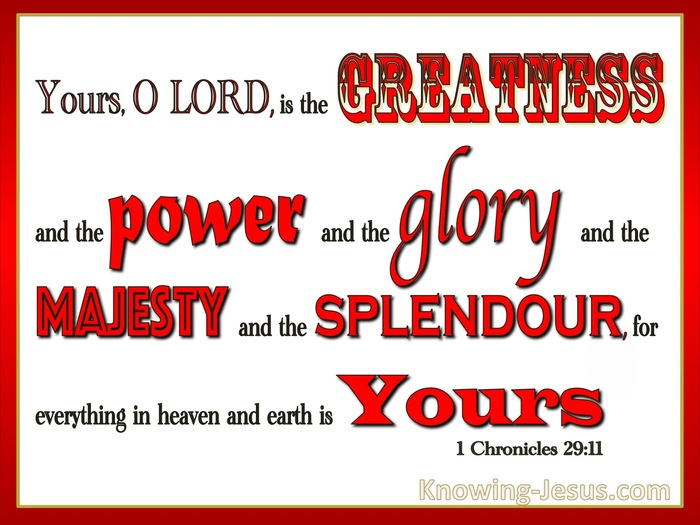 Thoughts on Today’s Verse
Although it was the great king Solomon whom God appointed to build the Holy Temple of the Lord, it was David who had the vision to assemble a House for God. David gave generously toward this project, and the hearts of the people were moved to give freely of their goods for this great undertaking. In the midst of much rejoicing and great joy, David made all the necessary preparations for the building of the House of the Lord.

And so it was that together with the children of Israel, David dedicated the silver and gold in preparation for this great undertaking. He collected together all the fine materials that the people had been gathering freely and had donated happily, for the construction of the Temple of God.

When all the preparations had been made, the king blessed the Lord and led the congregation of Israel in a wonderful prayer of blessing, thanksgiving, and jubilant praise, which began, “Blessed are You, O Lord God of Israel our Father, forever and ever.” For the first time in Scripture, we see the Lord being referred to as ‘Father’ by the people of God.

David’s prayerful song of thanksgiving and praise to the Lord continued in joyous enthusiasm, as he proclaimed with great jubilation, “Yours, O Lord, is the greatness and the power and the glory and the majesty and the splendour, for everything in heaven and earth is Yours. Yours, O Lord, is the kingdom. You are exalted as Head over all.”

The Lord is indeed worthy of receiving the exultant praise that David offered in his hymn of praise, for the heaven, the earth, and the entire universal creation came to be through His might and wisdom. Time and space and all that exists belongs to Him, and in His grace, He permitted David to make preparation for the magnificent Temple that his son Solomon would one day build.

Neither an everlasting string of superlative words nor a never-ending chorus of angelic praise can adequately express in speech or song, the magnificence of God’s awesome glory, the extent of His vast kingdom, the might of His great power and the splendour of His gracious majesty.

The mind of man cannot begin to comprehend this incomprehensible God, Who has bestowed on us all the unsearchable riches of His grace. He has lavished on us, over and abundantly and above all that we could ask or think or imagine or desire - in the person of the Lord Jesus Christ.

Let us never become too familiar with the gospel, or too complacent with its teachings, that we somehow forget Who it was that willingly gave up the greatness and power and the splendour of His majesty, to be born into humble poverty. Let us honour the One Who was despised of men, rejected by His people and nailed to a cruel tree, so that whosoever would believe on His name would be forever set free from the wages of death, which we all so justly deserve.

It is the God of the universe, Who flung stars into space at the beginning of time, and Who continues to uphold creation through His eternal Word, that was willingly stripped of everything, for your sake and for mine - but one day He is coming back to set up the kingdom that was promised so long ago to His forefather David, when once again the earth will resound with this triumphant hymn of praise, “Yours, O Lord, is the greatness and the power and the glory and the majesty and the splendour, for everything in heaven and earth is Yours. Yours, O Lord, is the kingdom; for You are exalted as Head over all.”

Let us worship Him together in the beauty of holiness, reverence, and with great rejoicing, for He is exalted over all and He is highly to be praised.

Prayer
Heavenly Father, I worship and praise You, for the greatness, power, splendour, glory, and majesty are Yours alone. May You be greatly honoured, for You are Head over all things and Judge of all men. Thank You for all You have done to redeem my life, and for bringing me into Your everlasting kingdom. May I never become too familiar with Who it was that hung on the cross for love of me. In Jesus’ name I pray, AMEN.