But as many as received Him, to them He gave the right to become children of God, even to those who believe in His name

But as many as received Him, to them He gave the right to become children of God, even to those who believe in His name, 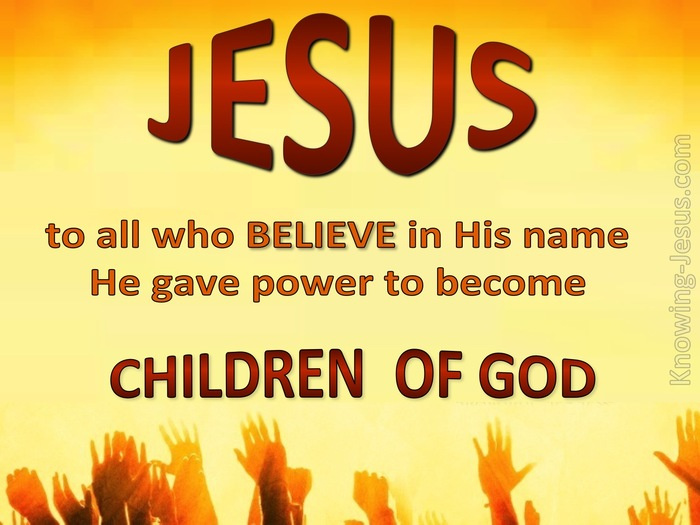 Thoughts on Today’s Verse
Many came to Jesus to accuse, ridicule and scorn Him, but the name of Jesus in the ear of the believer is the most beautiful of all names, for it is through our union with the Lord Jesus that we have been brought back into sweet communion with the living God, for there is no other name in heaven or on earth that has the power to seek and to save that which was lost.

Trusting in the name of Jesus is accepting Him as the incarnate Son of God, Who came to earth to be our substitute for sin. It is believing that Christ’s death, burial, and Resurrection procured our salvation. It is trusting that His atoning sacrifice paid the price for our sin, and that by faith we are born again into the family of God. It is believing that the consequence of sin is death, but that Jesus paid the penalty of sin by dying on the Cross for us. It is believing that Jesus took the punishment that we deserve, and that through faith in Him our sin has been blotted out forever, we have been declared righteous by God and covered in Christ’s own, perfect righteousness.

Believing on His name is the start of an amazing, everlasting journey that has given us the authority and privilege of being adopted into the family of God and being awarded the right to be called “children of God.” It is by faith in the Person and work of the only begotten Son of God, that we are granted this stupendous privilege, for “as many as received Him, to them He gave the right to become children of God, even to those who believe in His name.”

‘To believe in His name’, does not simply mean to believe that Jesus lived, as a historical figure, like Caesar Augustus, Cleopatra, or Tutankhamun. It does not mean to believe the fact of Scripture, as an intellectual exercise. ‘To believe in His name’, means to accept everything that the Bible teaches about the Lord Jesus Christ - that He was sent by God to pay the price for our sin - that He is the Word of God made flesh, Who dwelt among us and died as the sacrificial substitute for the sin of mankind.

‘To believe in His name’, is to believe that Jesus is God incarnate - the Creator of the world, Who came to earth as a Man… to pay the price for MY sin. ‘To believe in His name’, is to rely on Him for the salvation of our soul, rather than relying on our own good works for the forgiveness of sin and life everlasting. No self-effort, cleverness, or merit is sufficient to make us right with God! It is only by believing in His name that He gives us the right to be called His children.

But with the privilege of becoming a child of God comes responsibility, and our part is to receive Him - through faith. Our role is to believe in His name. Faith in Christ comes by hearing the Gospel, receiving the truth, and believing that Christ was crucified, died, was buried, and rose again, according to Scripture. And when we reach that position of faith - then God the Father grants us the right to become His child - and we are born of the Spirit and washed in His blood.

Not all however received Him when He came into the world. Not all believed on His name at His first advent and sadly, there are those today, that do not receive the truth of the gospel of God. There are those today who do not believe on His name, and so they do not have the authority to become children of God.

Although everyone is born into the human race, and is given the opportunity to become a child of God, many do not receive Him. They refuse to believe in His sacrificial offering on the Cross of Calvary, as payment for their sin, and they are not permitted to become His children. But to all who have received Him as their sin-substitute, down through centuries of time, by believing on His name, He has given the right and the authority to become children of God.

Jesus is indeed that Light of lights that came into the world… for it was in Him and through Him and by Him that the world was created, when God said: let there be light. Created light is but a dim shadow of the true Light of the world that lights every man and woman that comes into the world – so that ALL who receive Him and believe in His name have that authority to become children of God.

Heavenly Father, thank You that I may call You Father, because I am Your child, through Jesus Christ my Lord. Shine more of His light into my heart, so that I come to know You more and to love You better each day. In Jesus’ name I pray, AMEN.

There is only one way to be saved - “believe on the Lord Jesus Christ and you will be saved.”

Anyone who does not practice righteousness cannot be called as children of God. We should believe in the name of His Son, Jesus Christ, and we should love one another just as He commanded us. A lot of people claim to be God’s child, but in reality those who accept God and truly believe in Him and follow His ways in hearts and minds are His children.

indeed, the only way to be become a child of God is through Jesus, — as Jesus said No one comes to the Father except through me. so no religion can save us but JESUS.
all we have to do is BELIVE, believe that Jesus died for our sins and he came to save us to be in God’s family. also to be Officially be a child of God we need to REPENT OUR SINS and ACCEPT HIM AS HIS PERSONAL LORD AND SAVIOUR

Hello, dear @kianna
I loved all of your post, it’s always nice to read your post of the verses of each day.
This part was particularly moving for me:

believe on the Lord Jesus Christ and you will be saved.

So powerful… Because believing in Jesus is all of that that you wrote, it’s trusting him, following him, accepting him, loving him and much more… And that’s the only thing he asks of us for our own salvation, he gave his life and suffered so much for us, because he’s pure love!
Believing in Jesus name is the least we can do!
Kind regards, Luis Guerrero.

I loved all of your post, it’s always nice to read your post of the verses of each day.

Thank you so much, @Luis_Ruiz! Reading verses every day really helps me as I go on with my daily life so I love sharing it with people so it will brighten up their days, too!