David slew Goliath with a single stone, He chose 5, but it only took one because God was with Him and David knew it 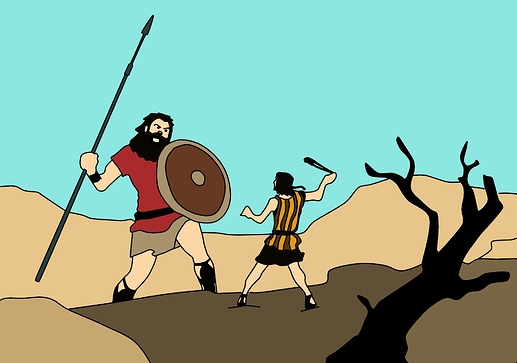 Gods gracious and bountiful faithful blessings to all of you in that name which paid for each and every one of them; Christ Jesus our Lord. Here is “A” “Thought” for the day; “a wonderful thought”. Every morning, I pass two wonderful strong reminders from Billboards put out by our wonderful Marines. They both say this, “Battles are won from within”.

What a mindset for each person to have and to believe. It is never the size of your opponent which determines victory or defeat. It is the thought you take into the battlefield. Our true battlefield goes right along with those Billboards, the true battlefield is in our mind.
I taught last night in our home fellowship this topic, “The mind of Christ, our example of thought”. We are encouraged to put on the mind of Christ. He had wonderful examples of believers to look to who took what was thrown at them and looked it in the eye and stood on the promise of God. Here is one example.

1 Samuel 17: 4 And there went out a champion out of the camp of the Philistines, named Goliath, of Gath, whose height was six cubits and a span. 8 And he stood and cried unto the armies of Israel, and said unto them, Why are ye come out to set your battle in array? am not I a Philistine, and ye servants to Saul? choose you a man for you, and let him come down to me. 9 If he be able to fight with me, and to kill me, then will we be your servants: but if I prevail against him, and kill him, then shall ye be our servants, and serve us. 10 And the Philistine said, I defy the armies of Israel this day; give me a man, that we may fight together. 11 When Saul and all Israel heard those words of the Philistine, they were dismayed, and greatly afraid. 22 And David left his carriage in the hand of the keeper of the carriage, and ran into the army, and came and saluted his brethren. 23 And as he talked with them, behold, there came up the champion, the Philistine of Gath, Goliath by name, out of the armies of the Philistines, and spake according to the same words: and David heard them. 24 And all the men of Israel, when they saw the man, fled from him, and were sore afraid.
We have quite the record here, quite the background being laid here. The whole army of Israel were afraid of this one man. They had no problem fighting the Philistines, but when Goliath came out; they ran and hid themselves.
1 Samuel 17: 26 And David spake to the men that stood by him, saying, What shall be done to the man that killeth this Philistine, and taketh away the reproach from Israel? for who is this uncircumcised Philistine, that he should defy the armies of the living God? 32 And David said to Saul, Let no man’s heart fail because of him; thy servant will go and fight with this Philistine. 33 And Saul said to David, Thou art not able to go against this Philistine to fight with him: for thou art but a youth, and he a man of war from his youth.
Here we have David, a young lad a shepherd who had nothing more than a staff and a slingshot. Here is the King telling him that there is no way David could overcome Goliath. Did David allow those words into his battlefield?
1 Samuel 17: 34 And David said unto Saul, Thy servant kept his father’s sheep, and there came a lion, and a bear, and took a lamb out of the flock: 35 And I went out after him, and smote him, and delivered it out of his mouth: and when he arose against me, I caught him by his beard, and smote him, and slew him. 36 Thy servant slew both the lion and the bear: and this uncircumcised Philistine shall be as one of them, seeing he hath defied the armies of the living God. 37 David said moreover, The LORD that delivered me out of the paw of the lion, and out of the paw of the bear, he will deliver me out of the hand of this Philistine. And Saul said unto David, Go, and the LORD be with thee.
If you know the record, David slew Goliath with a single stone, He chose 5, but it only took one because God was with Him and David knew it. David was convinced, fully persuaded. So, David stood on his wonderful thought because he trusted in the God that already delivered him, and he knew He could do it again. God Bless.

Hello, dear @FaithinGod
Great history to reflect… It’s a very good tale to hear, David and Goliath has become pretty popular names because of it. Thinking about it, it’s the definition of faith, and the confirmation of how powerful it is… Because with faith, even the size of a mustard seed we could move mountains, because the Lord always listen always care and always act, we just got to believe!
Kind regards, Luis Guerrero.