God Cares Every Details of You Life, Talk to Him 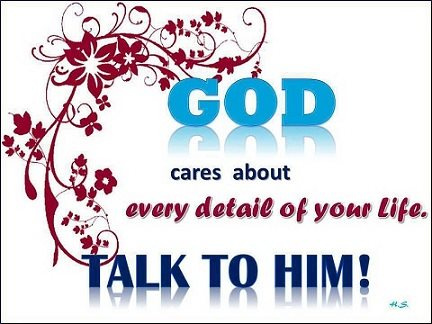 Some years ago, on a hot summer day in south Florida,
a little boy decided to go for a swim in the old swimming
hole behind his house. In a hurry to dive into the cool
water, he ran out the back door, leaving behind shoes,
socks, and shirt as he went. He flew into the water, not
realizing that as he swam toward the middle of the lake,
an alligator was swimming toward the shore. His father
working in the yard saw the two as they got closer and
closer together. In utter fear, he ran toward the water,
yelling to his son as loudly as he could. Hearing his
voice, the little boy became alarmed and made a U-turn
to swim to his father. It was too late. Just as
he reached his father, the alligator reached him.
From the dock, the father grabbed his little
boy by the arms just as the alligator snatched
his legs. That began an incredible tug-of-war
between the two. The alligator was much stronger
than the father, but the father was much too
passionate to let go. A farmer happened to drive
by, heard his screams, raced from his
truck, took aim and shot the alligator.
Remarkably, after weeks and weeks in the
hospital, the little boy survived. His legs were
extremely scarred by the vicious attack of the
animal. And on his arms were deep scratches
where his father’s fingernails dug into his
flesh in his effort to hang on to the son he loved.
The newspaper reporter, who interviewed the boy
after the trauma, asked if he would show him
his scars. The boy lifted his pant legs. And then,
with obvious pride, he said to the reporter,
“But look at my arms. I have great scars on my
arms, too. I have them because my Dad wouldn’t
let go.” You and I can identify with that
little boy. We have scars, too. No, not
from an alligator, but the scars of a painful
past. Some of those scars are unsightly and have
caused us deep regret. But, some wounds,
my friend, are because God has refused to
let go. In the midst of your struggle, He’s been
there holding on to you.
God loves you. You are a child of God.
He wants to protect you and provide for you in
every way. But sometimes we foolishly wade into
dangerous situations, not knowing what lies ahead.
The swimming hole of life is filled with peril, and we forget
that the enemy is waiting to attack. That’s when the
tug-of-war begins, and if you have the scars
of His love on your arms be very, very grateful.
He did not and will not ever let you go.
May God richly bless you as you remember how
He went to battle for your soul and WON!
–Author Unknown

" I cannot control everything that
comes into my life but I can choose
what I magnify.
–Pastor Steven Elevation church

Come into the hand’s of Father.
For “whoever calls on the name of the
Lord shall be saved.”
Romans 10:13

put together by Monica
Walk by Faith Newsletter

In the midst of your struggle, He’s been there holding on to you. God loves you. You are a child of God. He wants to protect you and provide for you in every way.

@Eric This brought me into tears. If our biological fathers could afford to give up their lives just to protect, sustain and love us, how much more our father in heaven who is the owner of the earth and our creator. He even gave his only begotten son to save us. God knows about everything , no need for us to worry, as long as we are with Him.

Why is God concerned not only about the big things but the small things in our lives? One reason is because He loves us. If He didn’t love us, He wouldn’t care what happens to us—and He certainly wouldn’t care about the little details that often preoccupy us or cause us the greatest worry. But He does love us, and we know this because He sent His only Son into the world to purchase our salvation. Jesus said, “even the very hairs of your head are all numbered. So don’t be afraid” (Matthew 10:30-31).