I am looking for scripture to support a religious exemption for medical purposes. Thank you

Hi. I don’t want to start a controversy or divide people. I am looking for scripture to support a religious exemption for medical purposes. Thank you. 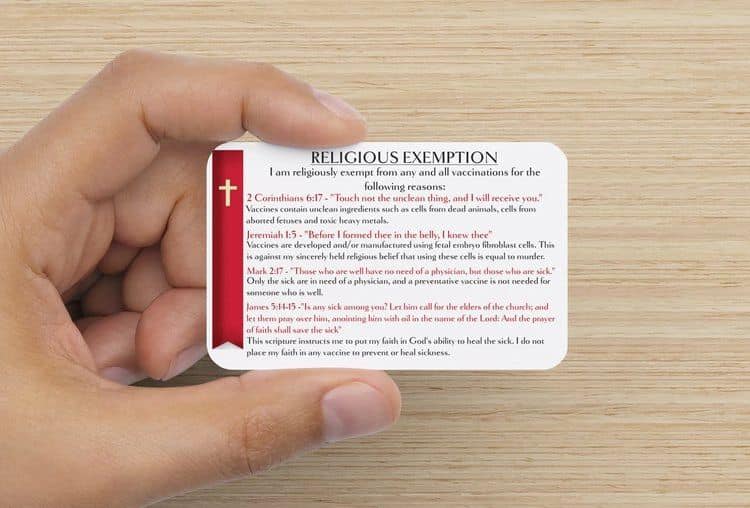 Do you know what is in every vaccine we have taken up until now? An actual virus that is tweaked to only be able to make one replica of itself so that your body continually makes enough antibodies to protect you from that virus.Do you know what’s in this inoculation? There are no viruses in the covid inoculation. It’s not designed to work but the traditional vaccine. It is an experimental mRNA treatment which makes changes to your immune system which causes it to attack, not viruses, but symptoms of viruses. It is a tweaking of your immune system. Do you know what it is called when you take something that God creates for a specific purpose and you change it by design to function for a different purpose? It’s called an abomination.

I trust God not man. If it is His will that i catch it, then no amount of masks or V’s are going to stop it plus, too many people having life threatening issues for me to want to take it.

There is a lot of deception in this group. A lot of denial. We are in the last days and we have a man signing an executive order to mandate a vaccine otherwise you can’t work? What’s next, you can’t buy or sell?! Open your eyes people. This is the precursor of the Mark of the beast. Trust in JESUS, not a man made (fake approved) drug. Jesus will heal you, he will protect you, he will provide for you. Just trust in him!

Psalms 139: 13-14 “I made you fearfully and wonderfully.” Vaccines are cultured on animal and human fetal cell lines from aborted babies and some contain human DNA and protein. There were two elective abortions from 1960 and those two abortions then created cells which have been used ever since. Scientists continue to grow those cells. (Thou shall not kill… Exodus 20:13-abortion kills). Scripture states, “our bodies are the temple of the Lord.” Thus 1 Corinthians 3:16-17 says we are God’s temple, if anyone destroys God’s temple God will destroy that person for Gods temple is sacred and we are that temple. Another verse: 2 Corinthians 7:1 because God says to purify ourselves from everything that contaminates body and spirit. (Human beings are created in God’s image (Genesis 1:27) therefore every person from conception to natural death possesses inherent dignity and immeasurable worth…and Christians are called to define, protect, and value all life. **"Moderna tested mRNA on the human cell line HEK-293, but not used in the vaccine. Pfizer/Biotech tested mRNA on the human cell line HEK-293, but not used in the vaccine. And J&J uses fetal cells PER.C6 (aborted babies) to produce and manufacture their vaccine. (Before I formed you in the womb I knew you, and before you were born I consecrated you. Jeremiah 1:5.) Christians stand for children who have no voice.

There are currently no religious organizations supporting any religious exemptions. Inappropriately using Jesus to obtain your personal will is a sin because you are putting yourself above others and putting others at risk, and using the name of Jesus to do it. That is NOT loving others, which All Christians are under command from Jesus to do. Just go get your vaccine.