Inexpressible: Hesed and the Mystery of God’s Lovingkindness

The Hebrew word, “Hesed” is often translated “lovingkindness” but scholars agree there is so much more to this word… with dimensions to it that we have not yet begun to understand, especially in translation.

Christian writer and musician, Michael Card, observes ~ “One of the fascinating features of biblical laments…was the way every one transitions.” These psalms begin lamenting (which is still a form of worship), and then at some unpredictable point they transition and begin to praise." This shift usually takes place by means of the Hebrew letter vav, which is usually translated ‘and’ or ‘but.’ "It is as if the lamenter finally exhausts himself and turns back to the God he was complaining to or about… "

In three important laments, Psalms 13 and 69 and Jeremiah’s Lamentations, the word hesed appears at this turning point. "It marks the transition from despair to hope, from emptiness to a new possibility of becoming filled once more. “It’s as if David and Jeremiah had run out of doubt and despair, had run out of words—except for this one untranslatable word. They could not exhaust its bottomless supply of hope, and by grace it rose to the surface of their lament, transforming it to praise.” Their self-centered ‘I’ mercifully became the God-centered ‘Thou.’ "The pain and frustration and anger were not wiped away but rather transformed by entering the world of this untranslatable, three-letter, two-syllable word-- Hesed.

“Because of the LORD’s hesed we do not perish, for his mercies never end. (Lam 3: 22)”
Maybe a closer translation than “lovingkindness” would be~ “His wild, extravagant, glorious, unfailing love!”

Love too big for our minds to ever comprehend.

“How precious is Your (wild, extravagant, glorious, unfailing love,) O God! And the children of men take refuge in the shadow of Your wings.” (Psalm 36:7)

“Because Your (wild, extravagant, glorious, unfailing love) is better than life, My lips will praise You.” (Psalm 63)

“Though the mountains be shaken and the hills be removed, yet My (wild, extravagant, glorious, unfailing love) for you will not be shaken." (Isaiah 54:10)

It’s like comparing our vision of the stars in the night sky to the visions captured by the Hubble Telescope in that same sky.
We read “love” or “lovingkindness” but the true meaning is that much more than we can even imagine.

That’s the Love that lives and moves inside us, that offers us refuge in the darkest hours, that lights our way and guides our lives…
And that’s the extravagant Love that we can offer others, because it is far too much for us to hold inside! 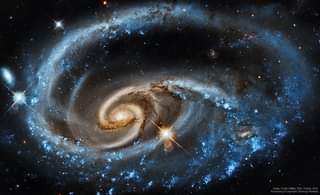 Wow, the world of Hesed, it’s meaning is so profound, I never know it before