Taste and see that the Lord is good; blessed is the one who takes refuge in him. 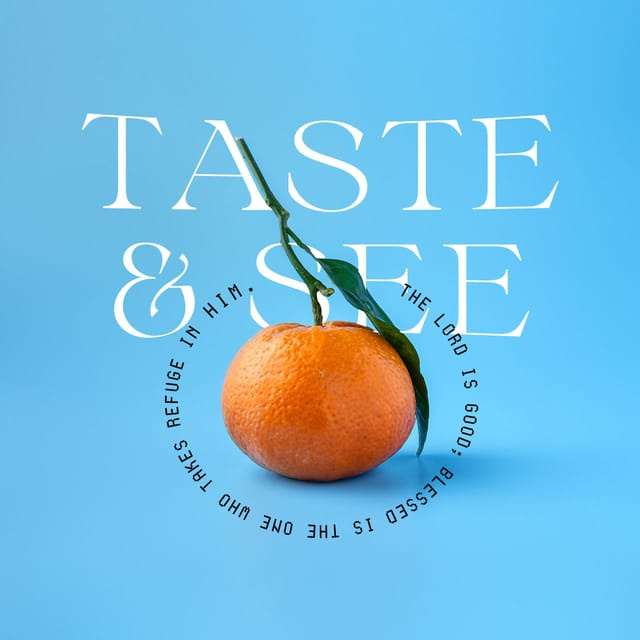 Verse Thoughts
Over and again we discover wonderful ways that the Lord delivers His servants from their afflictions and saves them from the hands of their enemies. It was for this reason that the psalmist’s great song of joy and rejoicing rang out with the words, “O taste and see that the Lord is good. How blessed is the man who takes refuge in Him”.

This call for men to trust in the Lord; to taste of His faithfulness and to see that the Lord is good and gracious, stands in the centre of a psalm that begins by blessing the Lord at all times and praising Him continually. It is a trumpet call for men to glorify the name of the Lord and to lift Him up in a symphony of worship and praise, for He alone is worthy of our honour.

It is David who is credited with these beautiful words, and the reason behind his exultant praise is that he sought the Lord… and God answered His prayer. The Lord delivered his servant from all his fears. Though David had been anointed as king of Israel, he was on the run from Saul, who had become jealous of God’s anointed one, and in his attempt to escape from one bitter enemy David fled into the arms of another deadly adversary - the king of the Philistines!

Achish, the king, recognised David as the man who was proclaimed throughout Israel as being the great champion of God’s chosen people: “Saul has slain his thousands”, was their joyful chant, “and David has slain his tens of thousands”.

King Achish realised that he was vulnerable, and in his attempt to escape from harm, David changed his behaviour and feigned madness, dribbling from his mouth and simulating insanity! Yes, his little play-acting worked and David escaped from his enemy.

David had trusted the Lord from his youth and although he was not exempt from tribulation and trials, he knew the Lord would bring him through any difficulties and danger. God may not prevent life’s problem and pain, but He knows how to rescue the righteous from the evil one, and reminds us that “the Angel of the LORD encamps around those who fear Him, and rescues those that are His”.

God still had work for David to do, and whether by his amateur dramatics or by some alternative strategy, David recognised the protecting hand of God upon His life and was prepared to give thanks and praise to the Lord, for His wonderful deliverance from his enemies. But he also wanted to encourage others to taste and see for themselves that the Lord is good and blesses those that trust in Him. He wanted others to learn the same lesson that had so rejoiced his soul - that those who trust in the Lord are blessed indeed and will not be disappointed.

David was a man after God’s own heart who recognised the sustaining hand of the Lord in his own life and gave honour and praise to Him at all times. And like David, we would do well to hide under the shadow of God’s protective arm, to seek Him in the midst of our trials and tribulation, and cry out to the Lord for deliverance from the enemies, into whose path we run – so that we too may rejoice with great joy and encourage others to "taste and see that the Lord is good and to know how truly blessed is the man, who takes refuge in the Lord.

Heavenly Father, thank You for Your Word and the wisdom that it contains. Thank You that I have tasted of Your saving grace and am eternally blessed, by trusting in Jesus as my Lord and Saviour. May I seek You in all the difficulties and dangers of life I may face, and recognise Your guiding hand of grace and protection, knowing that all who trust in You will never be put to shame. Thank You that You are my refuge and strength and my ever-present help in troubled times - thank You in Jesus’ name, AMEN.

Hello, dear @kianna
Lovely as usual! I always thank the Lord for giving me a family that was so religious from the start, they showed me the way to finding him, and he instantly got me a better life. It’s funny, because you can see how so many devoted people are so happy with their faith. It’s God’s work there.
Kind regards, Luis Guerrero.

Oh, how abundant is your goodness, which you have stored up for those who fear you and worked for those who take refuge in you, in the sight of the children of mankind! Psalm 31:19

God has good plans for us. Plans to bless his children abundantly. And because he is in control, nothing can stop him from fulfilling those plans. So keep praying and asking him to pour out his abundant goodness upon you!

We are blessed by The One who promises to take care of those who trust in Him as Psalm 84:12 tells us, “The Lord of hosts, blessed is the man who trusts in you.” Let us pray that this morning we never stop relying on God no matter how difficult the situation. It is in moments of trial and difficulty that God promises to bless our lives. We do not trust any man, our dependence is fully in God. Do not forget the previous verse of the portion we read this morning, “Thus says the Lord: Cursed is the man who trusts in man, and makes flesh his arm, and whose heart departs from the Lord” (17:5). Today more than ever we must choose to put our faith in God! He will be our portion and blessing.

Hello, sir @Luis_Ruiz! Families like that are really a blessing from the Lord God, we are guided and on the right path because of them