The Knife Angel: A Devotional

Nation will not take up sword against nation, nor will they train for war anymore.
-Isaiah 2:4

When knife crime rose across the United Kingdom, the British Ironwork Centre came up with an idea. Working with local police forces, the Centre built and placed two hundred deposit boxes around the country and ran an amnesty campaign. One hundred thousand knives were anonymously surrendered, some still with blood on their blades. These were then shipped to artist Alfie Bradley, who blunted them, inscribed some with the names of young knife-crime victims, plus messages of regret from ex-offenders. All 100,000 weapons were then welded together to create the Knife Angel—a twenty-seven-foot-high angelic sculpture with shimmering steel wings.

When I stood before the Knife Angel, I wondered how many thousands of wounds had been prevented by its existence. I thought too of Isaiah’s vision of the new heavens and earth (Isaiah 65:17), a place where children won’t die young (v. 20) or grow up in crime-breeding poverty (vv. 22–23), a place where knife crime is no more because all swords have been reshaped and given more creative purposes (2:4).

That new world isn’t yet here, but we are to pray and serve until its arrival (Matthew 6:10). In its own way, the Knife Angel gives us a glimpse of God’s promised future. Swords become plowshares. Weapons become artworks. What other redemptive projects can we conjure up to glimpse that future a little more?

By: Sheridan Voysey from Our Daily Bread

I love this and I got really intrigued! This devotional and story gave me hope for a brighter and more peaceful future! Ever since I was young, I always hoped that soon violence would end and people would change their negative behavior and mindset. This gave me hope. I am beyond excited for what the future will hold. God has plans for us all!

Did a little research because the Knife Angel really got me all curious!

The 27ft tall sculpture is made from over 100,000 seized blades and was created to highlight the negative effects of violent behavior. It symbolizes a call for change whilst acting as a national memorial for victims of knife crime.

Here are some pictures: 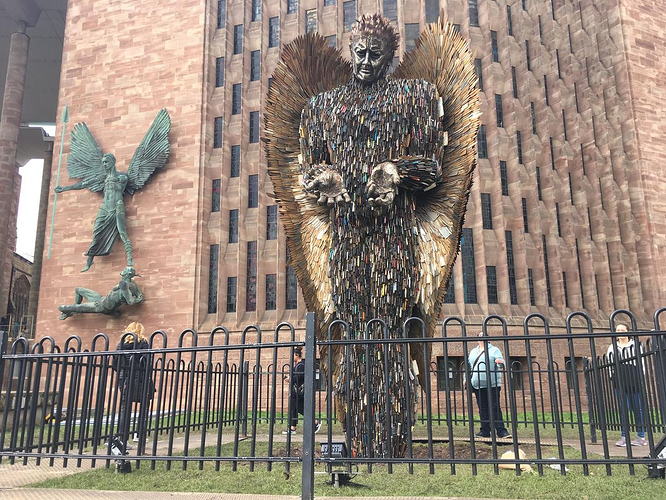 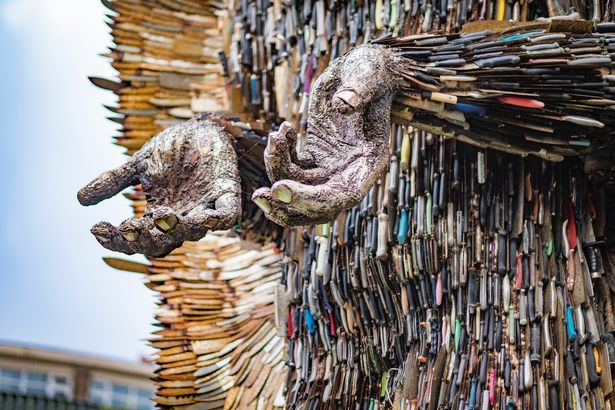 a closer look at the knives!

Hello @kianna its nice this is the first time that i saw this one.
Its a nice art work. But i love what is the message of the Sculpture " call for change whilst acting as a national memorial for victims of knife crime" . I hope phils. will make that one too. Because i think we have lots of crime rate before the pandemic happen. Its a great art and powerful message.

Truly! A lot of people are getting involved in such crimes. I just hope though that whatever we try to show to them, they will appreciate and understand. Because mostly, people only listen to themselves.

BUUUT, with the Lord God and with prayers, nothing is impossible!

@kianna: thanks for the effort of researching dear…I bet you sleep late again hehe…In our present world today, crimes happened left and right. And it is so heart-wrenching seeing news about stabbing that includes children. Though it is impossible for us to imagine for a zero crime rate in our country, let’s lift up our hopes in God. What is impossible for us, is possible to God. So let us hope for the best!

Hello, dear @kianna
First time seeing something like this, let me tell you this is wonderful. We live in a society where violence and justice don’t come at the same rate and this causes a lot of troubles… And even with it, it’s better to do things like this that can cause even in an unconscious level change the mentality of people. Artistic expression will always be better when it has a good message, and I like this a lot. You can interpretate it to cause fear of God or justice of God, or by the expression of the angel his sorrow for the violence we cause, even a call up to stopping. Love it. Thank you for this.
Kind regards, Luis Guerrero

Very true! I always hope and pray that soon, things will get really really good and peaceful. Nothing is impossible with the Lord God!

Hi @kianna! “Save a life, surrender your knife” was such brilliant idea. I wish that we could also do that here in Philippines since we have the highest crime rate in Southeast Asia. I personally think that people involve in crimes are blinded by Satan’s schemes. Just like Paul, who imprisoned and murdered many Christians, but was then called and transformed into a preacher. He is a witness that it’s never too late for a renewal.

Hello there, @Luis_Ruiz! Yes, one thing is for sure, the change of mentality is really needed to at least lessen such cruel doings. I hope that by seeing the Knife Angel, there would be a change of mindset on people.

Hi there @kbadum! Yes I agree with you, they are blinded by anger, hatred, envy, etc and all of these are because of evil. Their bond with the Lord God is weak, I pray they will soon be enlightened and may realize what they are doing is bad. Every problem has a million solutions most especially since we are guided by God.

Hello again, dear @kianna
I always have found so fascinating this kind of artistic expressions, it always comes with a secret or unconscious message to our minds. And also the style is so striking to me, very cyberpunk I think it’s the term.
Inspired by this topic I found another sculpture very aligned with the topic of angels and the modern world: monument to the unborn by Timothy P. Schmalz.
Here is a link: Monument To The Unborn – Sculptures by TPS
And a pic: 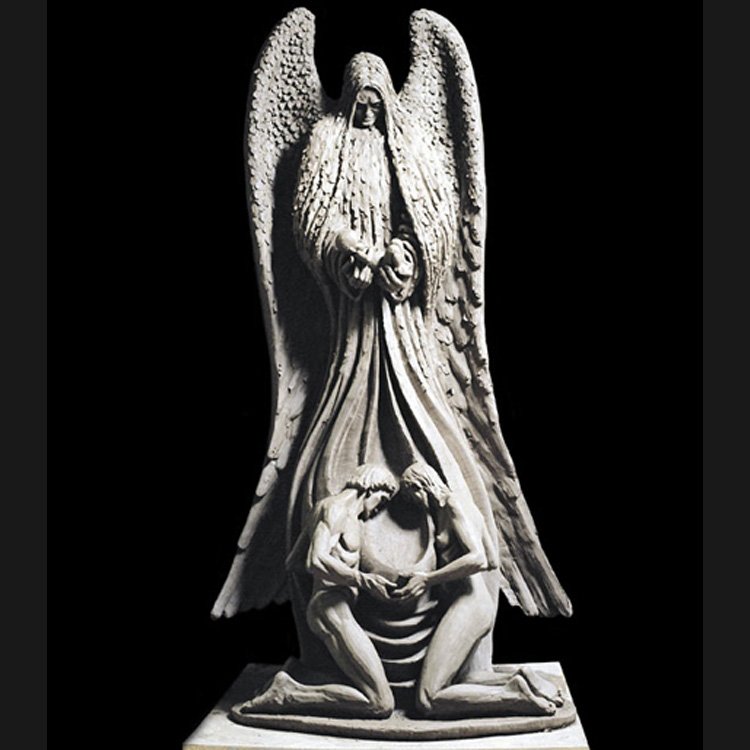 Wow, thank you for this @Luis_Ruiz! God bless you and always keep safe!
A word to live by during this pandemic:
Psalm 46:1-2, 7 “God is our refuge and strength, an ever-present help in trouble. Therefore we will not fear, though the earth give way and the mountains fall into the heart of the sea; The Lord Almighty is with us; the God of Jacob is our fortress.”