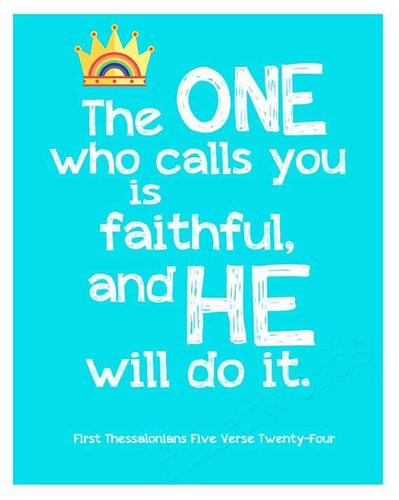 From the pit to the palace!
Joseph of the Bible suffered one adversity after another. In reading about his life, one would be amazed that he never threw in the towel.
His jealous brothers threw him in a pit and had him sold into slavery.
After being sold, he rose up in 'Potiphar’s house, until his wife tried to make advances toward Joseph. When Joseph refused, Potiphar’s wife lied and said Joseph tried to attack her. Joseph was thrown into prison.
He stayed there for a couple of years until the day came when He was called by Pharaoh to interpret his disturbing dreams. Joseph found favor with the King. But he struggled from the age of 17 until he was 30 to see breakthrough in his life. One key element was resounding throughout Joseph’s walk. He never gave up.
It may seem like things will never go your way, but God will never disappoint, or give up on you.
Thess. 5:24 Faithful is He who calls you, and He also will bring it to pass.

It may seem like things will never go your way, but God will never disappoint, or give up on you.

Indeed! You may find a lot of challenges as you go on with life but what one thing is for sure, pain is temporary. God will save us and help us. Let us be like Him, be patient and understanding. The challenges we meet will mold us into stronger versions of ourselves, it will teach us to be humble and grateful. There is always a light at the end of the tunnel.

It may seem like things will never go your way, but God will never disappoint, or give up on you.

I love this lie sir @brady, thank you so much for sharing this. I am really blessed with this assurance from God, this message is really for me I am claiming it right now. Having this experience in life right now where nothing seems to go right like everything I do turns out to be wrong, and be assured by God to never give up because He will never disappoint me, means a lot. It gave me a stronger will to face life’s battle knowing that my God is there waiting for me in the finish line.