VERSE OF THE DAY: June 24th

And anyone who believes in God’s Son has eternal life. Anyone who doesn’t obey the Son will never experience eternal life but remains under God’s angry judgment.” 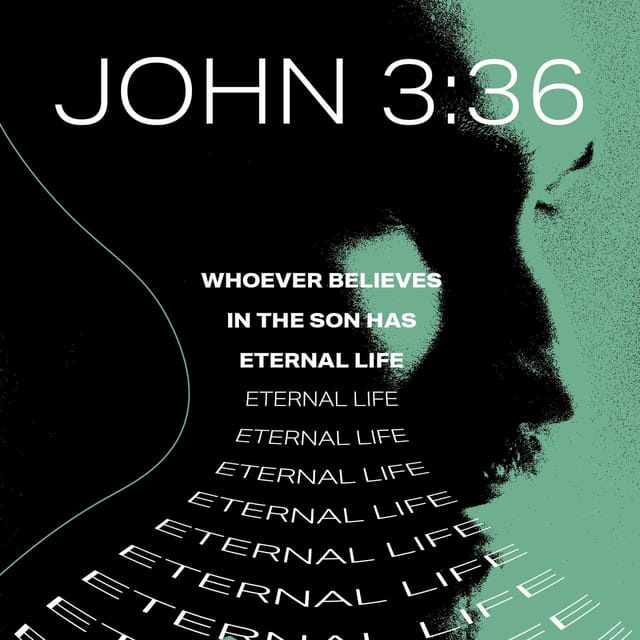 Verse Thoughts
John the Baptist was the earthly witness that God used to present His dearly beloved Son to the world. He bore witness that: the Father loves the Son and has given all things into His hand… and that He who believes in the Son has eternal life; but he who does not obey the Son will not see life, but the wrath of God abides on him.

John was to bear witness that Jesus Christ came from heaven as the Lamb of God, Who takes away the sin of the world - by grace through faith, so that all who believe in Him would not perish but have everlasting life.

But John was not merely an earthly witness, pointing us to Christ. John was a voice crying in the wilderness: prepare ye the way of the Lord. John was the one who recognised the glory of the Lord, about whom he was testifying and cried out: He must increase and I must decrease. John pointed people to the Lord Jesus… for Christ Himself, was sent to bear heavenly witness of the invisible God, Who loved the world so much that He gave His only begotten Son, so that whosever believes in Him would not perish but have everlasting life.

Believing in the existence of Jesus does not result in eternal life, for the historical evidence of His existence, (in both sacred and secular writings), is irrefutable. Eternal life is only received by believing that Christ Jesus came into the world to save sinners and that salvation is a gracious gift of God, that is received by faith in His cruel death and His glorious resurrection… He redeemed us from the curse of the Law, and secured redemption and the forgiveness of sin… for all who would trust in His finished work at Calvary, for the salvation of their soul.

God has given Christ the power and authority to bestow everlasting life on all who trust in Him for their salvation… and it is granted simply by believing on Him, for He who believes in the Son has eternal life. But the chilling words that follow warn us that whoever chooses to reject the clear teaching of the gospel of grace, will experience shocking and eternal consequences: for he who does not obey the Son will not see life, but the wrath of God abides on him.

Life is in the Son and He who has the Son has life and there is no condemnation to those that have placed their faith in Him. Christ’s clear command to all sinners is to believe His heavenly testimony, for whoever hears My word and believes Him who sent Me has eternal life, and will not come into judgment, but has passed from death to life. For this is the work of God as well as the command of God… to all who are dead in their trespasses and sins: that you believe in Him Whom He has sent - that you believe in Christ’s finished work, for the forgiveness sins and life everlasting

Heavenly Father, thank You that You loved me so much that You sent Jesus to die on the cross in my place. Thank you that He rose again from the dead, so that by faith in Him I might not experience the shocking and eternal consequences of God’s wrath, but receive the free gift of eternal life. Thank You for Your amazing grace. Thank you that You loved me so much that while I was still under Your wrath and dead in my trespasses and sins, Christ died for me. I pray that I might live for Him. To Him be all praise and glory, for ever and ever AMEN

Amen to that thank you for this i love it. Whoever believes in the Saviour, is set free from every sin.
Jesus is the perfect name!
He who put away his fame!
And persecuted in shame!
That you will never be the same!
It’s because of you and I He came!
Believe him or have yourself to blame!
In the book of life, have your name!

Jesus is the perfect name!
He who put away his fame!
And persecuted in shame!
That you will never be the same!
It’s because of you and I He came!
Believe him or have yourself to blame!
In the book of life, have your name!

I love this! Praise the Lord Jesus Christ our Lord and Savior!